Since the New Towns Act of 1946 there have been several brand-new towns created across the UK with the aim of modernising the country and providing a blueprint for how things could be different in the future. It hasn’t always worked, and the brutalist architecture in some of the new towns might not be to everyone’s taste decades later, but it does throw up some interesting ideas and concepts on urban planning and how to create towns from scratch in terms of transportation routes and other aspects of creating an efficient town or city. One town that sprung up as a result of the New Towns Act of 1946 was Harlow and a way in which it tried to stand out was through the implementation of sculpture throughout the town.

The Art Trust has been used to transform parts of the town with sculpture. The Trust is widely admired and has now commissions over 100 pieces of art, including Trigon (a three-legged bronze sculpture in the shopping centre of Harlow), and Twofold (a 17ft steel sculpture that is inspired by Michelangelo’s David and Wassily Kandinsky’s Diagram 17).

Harlow was created out of the ashes of the Blitz, when Patrick Abercrombie saw an opportunity to move half a million Londoners to eight new satellite towns outside of the city. Harlow was originally planned to hold 60,000 inhabitants, with the later plans pushed up to 80,000 by 1952. It was an idyllic place to live at first for young mothers moving from the East End of London. After a while though (as with many other New Towns built around that time) it became a concrete town with no soul and definitely no community spirit. For many people moving to Harlow they had been used to a full and warm community spirit in the East End, and this just didn’t translate in the same way to the New Towns. 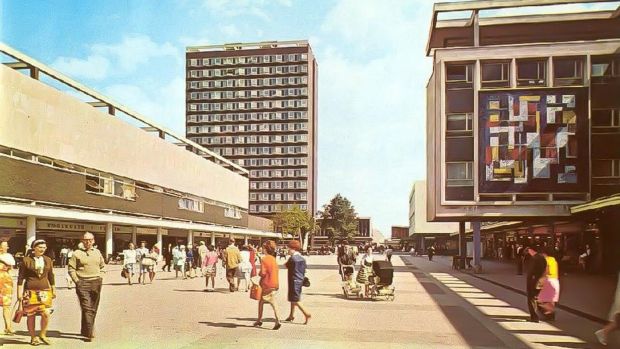 In the 1980s and 1990s when industry started to collapse in many of the New Towns throughout the UK there was a danger that the identity of these towns would be lost for good. In Harlow it was the loss of manufacturing employment on a wide-scale (including the famous biscuit factory) and the population actually fell for the first time.

The utopia of New Towns would soon descend into pessimism and a loss of faith in identity and usefulness when compared to more organic towns and urban centres. One of the good things that came out of it though, as with the Art Fund in Harlow, is the fact that art could flourish, with a completely blank slate for artists to create new artwork for community and public spaces. We all know about the famous concrete cows in Milton Keynes, and in Harlow there is the many sculptures found throughout the town. Commissions are often more radical that in established, traditional towns and cities, due to the fact that New Towns are keen to grab some form of ‘different’ identity to make them stand out.

VIEW ALL POSTS BY Kaylee Isaac

There will be hose that will try to tell you that your dram home does not exist and that it is just a pipe dream. Recently as you look around the property market, it seems that what they say is in fact true and no matter how hard that you look, your dream home is […]

Bed bugs are tiny and brownish insects that can move quickly from one place to another. They may not be able to fly but they can run away swiftly if you try to get a hold of them. This makes it difficult for you to get rid of them. They can be found on ceilings, […]